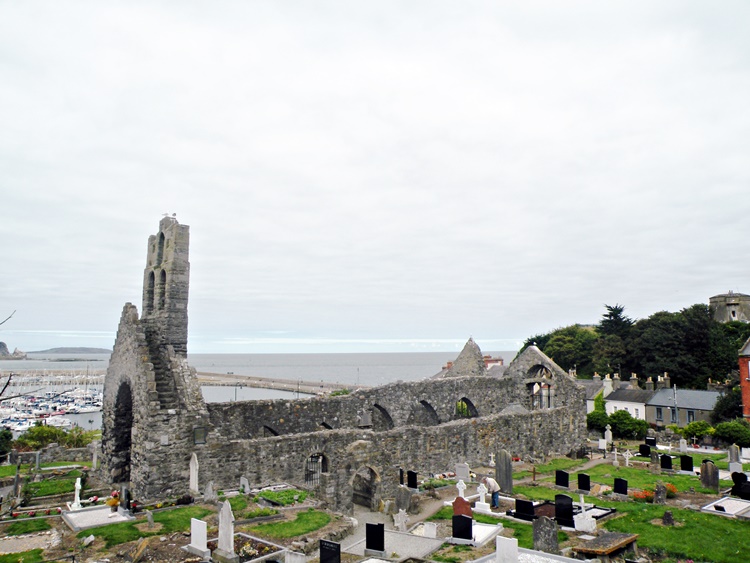 The demo at Hildring House is not so elegant. Nor, however, is it intended to be. Things are moving right along, though. Let’s take a look.

Here’s a side project that I’m doing in the grandboys bedroom while the pros get rid of whole walls and brick things in the rest of the house: 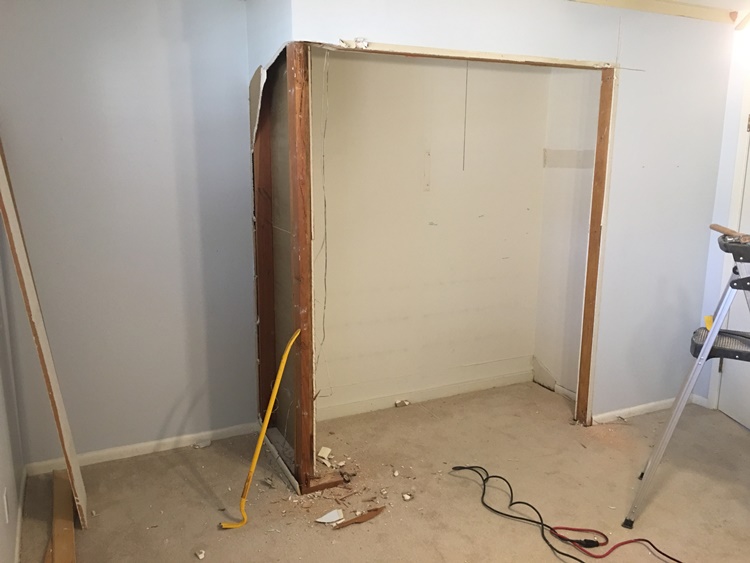 I’m taking out the closet so that we can put in two Ikea pax wardrobes on either end with a desk built for two in between. This house was built in 1960 and the wood has hardened over the years to something like iron. 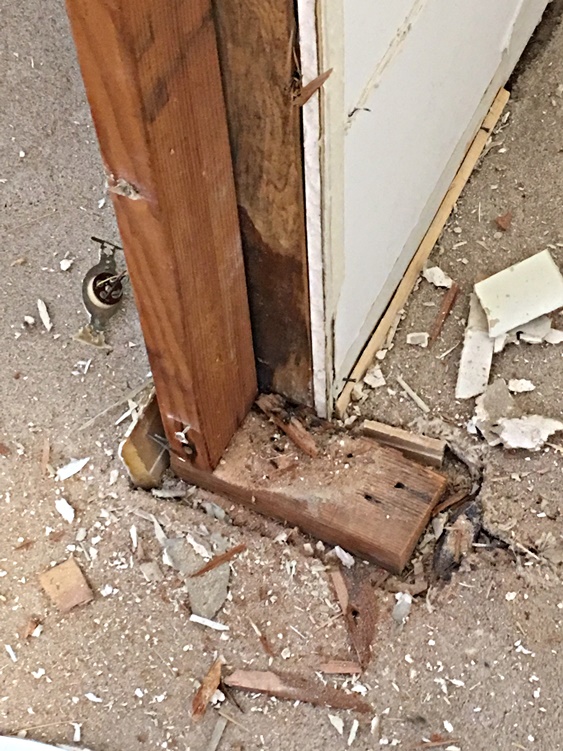 And the plates are attached to the concrete with old-style masonry spikes. I’m developing an increased respect for the guys (John, Tim, and Wilbur) doing the demo in the rest of the house. 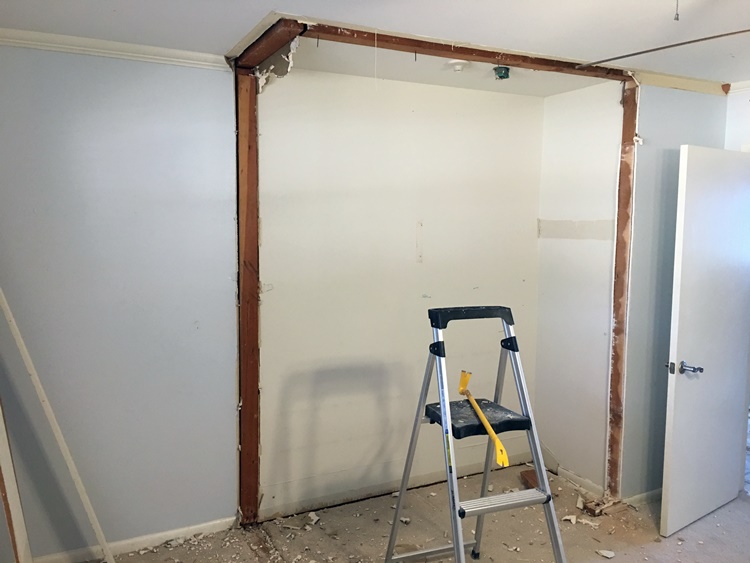 The space available doesn’t extend all the way to the door wall, by the way, since the entry closet occupies that area. There should be plenty of room for our purpose, though.

Back to the professional work: There is an area in the home that I don’t have a “before” picture of but I think you can get an idea of why it was a problem by looking at a couple of “afters.” 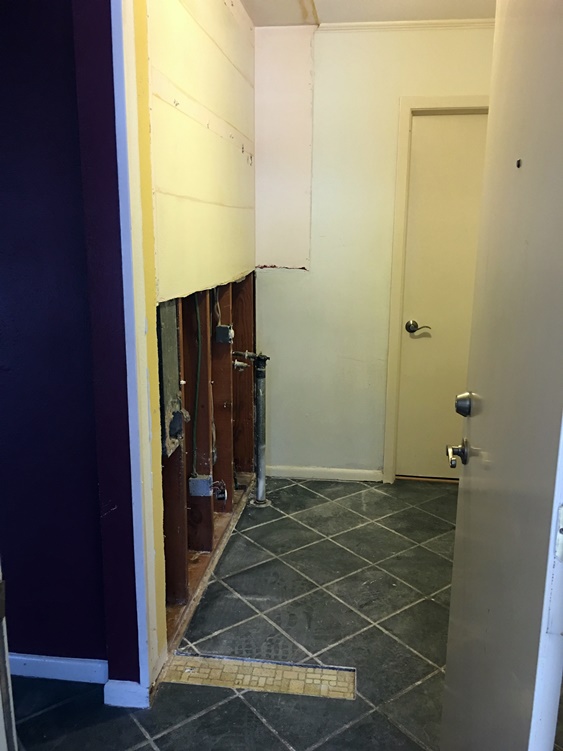 This view is coming in from the garage. The kitchen is off to the left and the mother-in-law suite is off to the right. The closed door at the rear of the view is the for the mother-in-law room but is not really en suite, since the door doesn’t lead into the bedroom. The area pictured is the old “laundry room.” I put that in quotes because, as you can see, it’s not really a room – just a sort of open closet. There was a wall where the old linoleum is peeking through the slate-look ceramic tile. That wall and the door to the garage and the door to the bathroom and the door to the bedroom and the washer and dryer all crammed into such a small space made this part of the house so cramped and claustrophobic that just the thought of going back there could induce panic attacks.

It’s gone now, as you can see. And, as I mentioned last time and as we’ll see in a minute, the washer and dryer will move to a new, more commodious space. At some point in the future, the door to the bathroom will be relocated into the bedroom and some of the old “laundry room” will be taken into the – then – en suite bath. At that point, the “mother-in-law suite” will become “Debra’s Domain.” But that will be a post of its own, no doubt.

Take a look at this area from the kitchen and I think you can get an idea of how cramped it was:

Remember the brick thing that had the columns on top of it? Gone:

Here is a view from the front of the house looking toward the new laundry room and powder bath area: 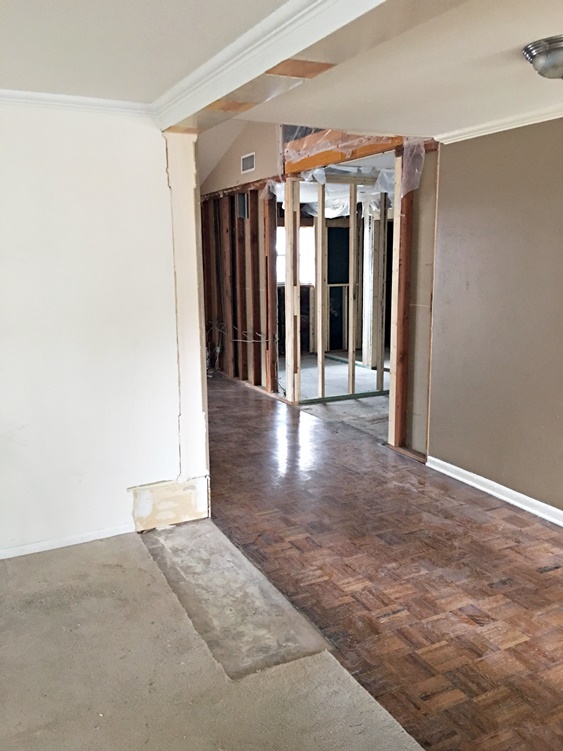 And another view toward the dining room/library and kitchen. 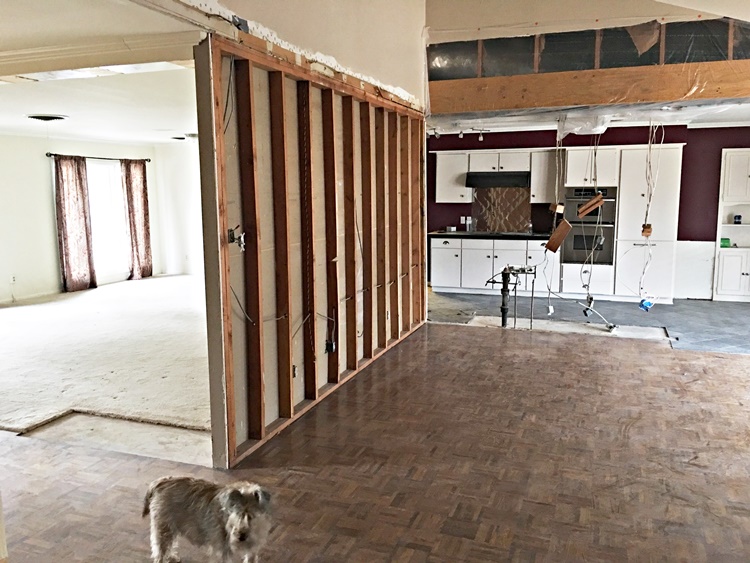 The box holding the florescent cove lighting on the wall separating the family room and the library is gone – to be replaced with library-arm wall-wash lighting – and reveals the original wall paper: 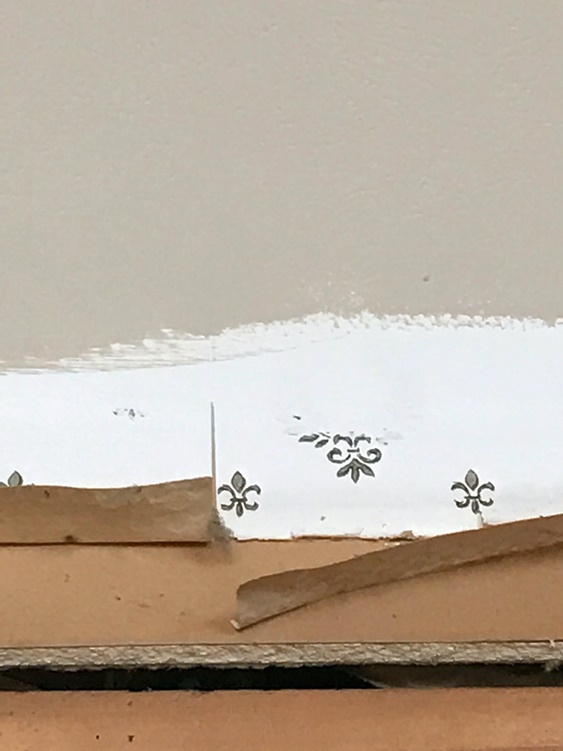 For some reason, this made me think of the line from the Robert Earl Keen/Lyle Lovett song “This Old Porch” that goes – “Well this old Chevy, she was something back in ’60.” The same could be said about this house. But it’s 1960 no longer and past time for an update! 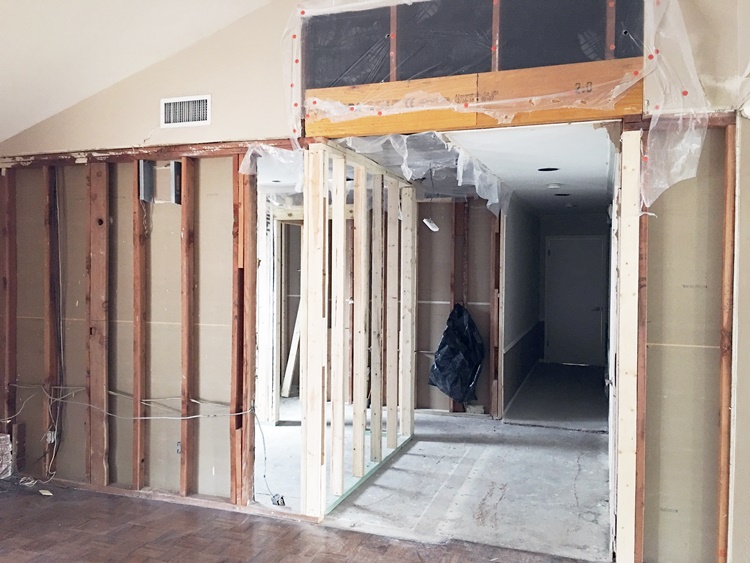 You can see here new framing going in, along with a support beam across the much wider open space leading to the hallway. The new lumber is the wall for the new laundry room.

The view below is from the corner of the new laundry into the powder. 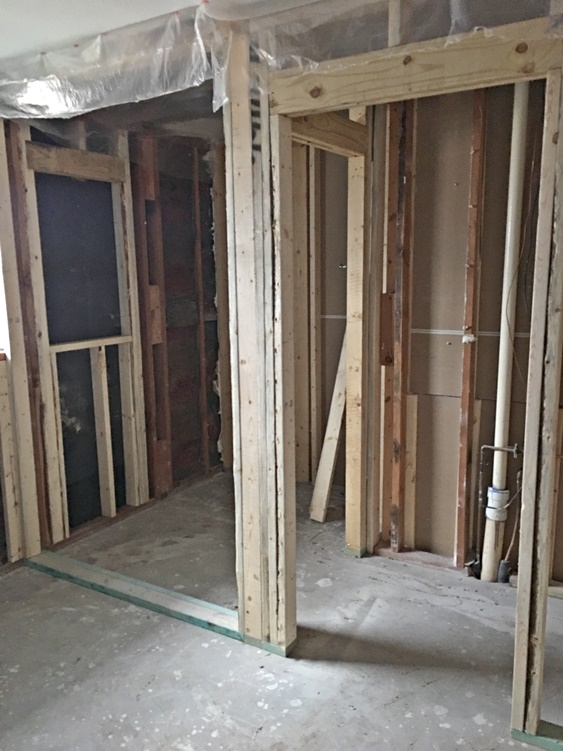 Debra has some lovely ideas for the new powder. She says that it’s time for a “pretty post” after all the dust, so I suspect that the next one will feature some of her decorating choices for this area.

I’ll close with a shot of the kitchen wall that is no longer. The header is gone and the new support beam is in place. Picture the 9’10” island centered in that space – 4′ open on either side. It’s going to be great! 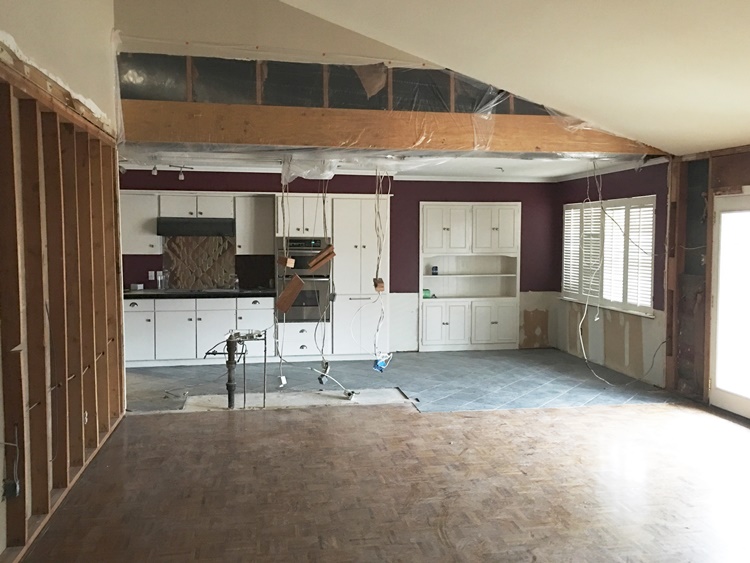 We just keep getting more excited about this journey! Thanks for joining us thus far. We hope you’ll stick around for the whole ride!

7 Replies to “Hildring House – More Demo and a Little Progress”