It’s time for things to get messy – not dirty and decrepit like the street scene from Montevideo, Uruguay, below, 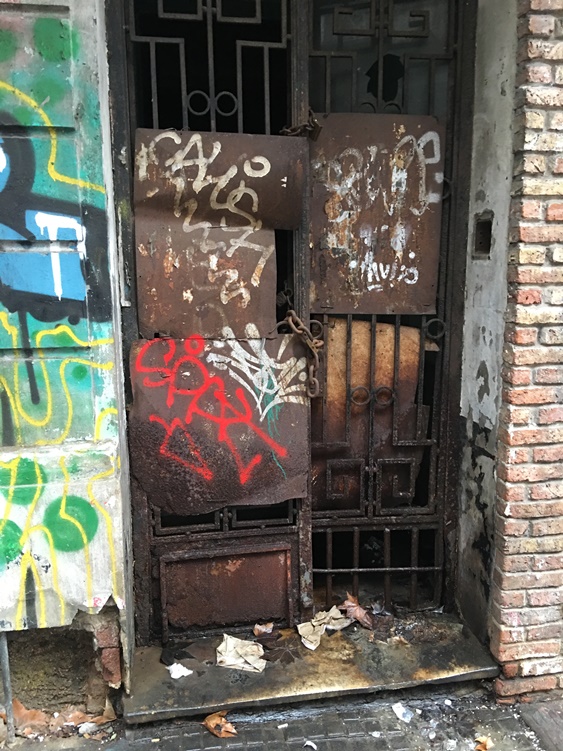 but sawdust flying and sheet rock dust hanging heavy in the air as the old gets torn out to make way for the new.

The kitchen at Hildring House is a galley – long and narrow. While we’re eventually going to completely gut and re-do the whole thing, budgetary restraints dictate that we do only half of it immediately. And it has to be immediately, since we’re immediately replacing all of the flooring in the house, including that in the kitchen.

This is the half that we’re doing right away: 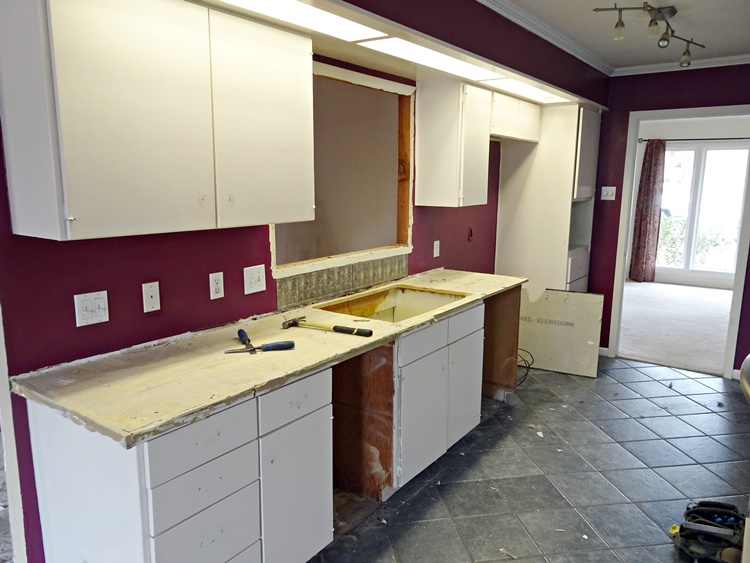 So this wall, seen here with the sink, dishwasher and wine fridge already removed, will soon be a memory. And not a very good one, at that. Whoever thought that purplish-burgundy would be a good color for a kitchen?

Here’s the same wall from the other side, looking at it from the family room: 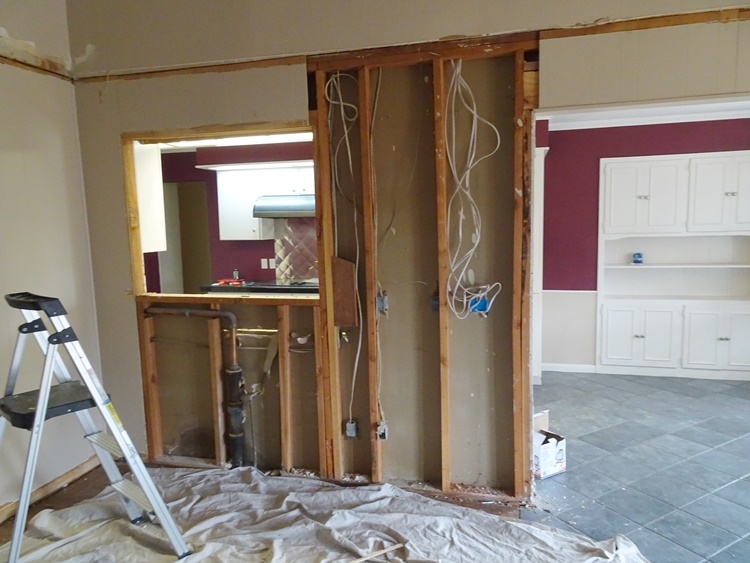 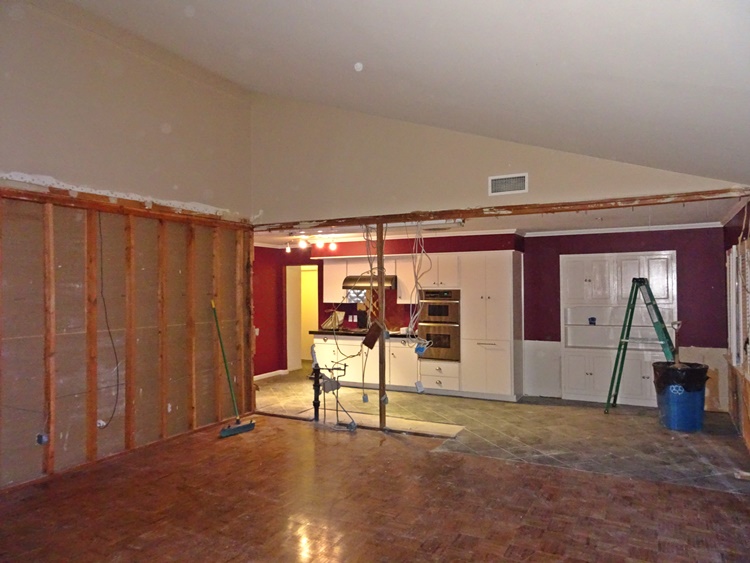 This picture is taken from the north wall of the family room, which is going through some changes of its own (more about that later). The new flooring will be uniform throughout most of the house, so the tile and parquet will all come up and be replaced by hardwoods. During the demo, we discovered the original linoleum that was under the slate-look ceramic in the kitchen.

Here is Debra stepping off the island, which will contain the sink and dishwasher and will replace the wall that has been removed: 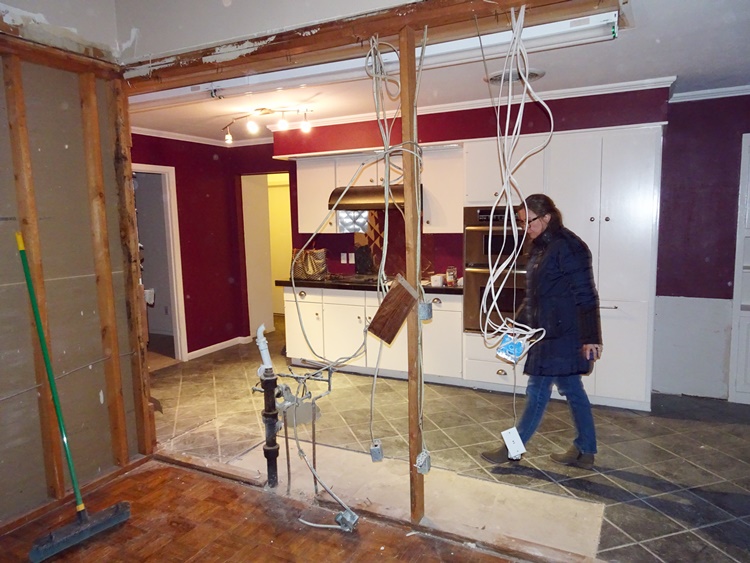 Getting rid of walls is always fun, I think. we’re big fans of openness in design and Debra loves to throw parties, so she’s always conscious of the flow in “public” spaces, not only from a structural standpoint but also from a finishes one. Eliminating the difference in flooring material between these two rooms will enhance the flow visually. Eliminating the obstruction of the wall enhances it, as well. The next picture gives some idea of how the sight lines into the family room will be increased: 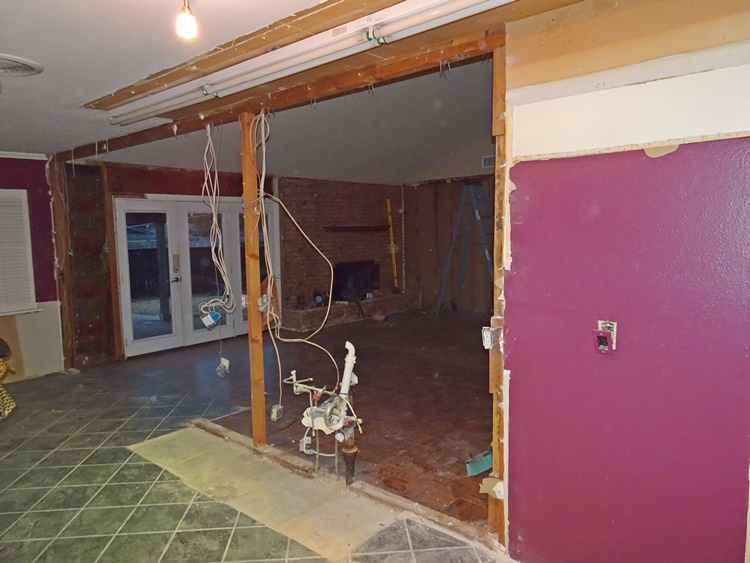 The dangling wires and stubbed plumbing almost look like some kind of modern art installation: 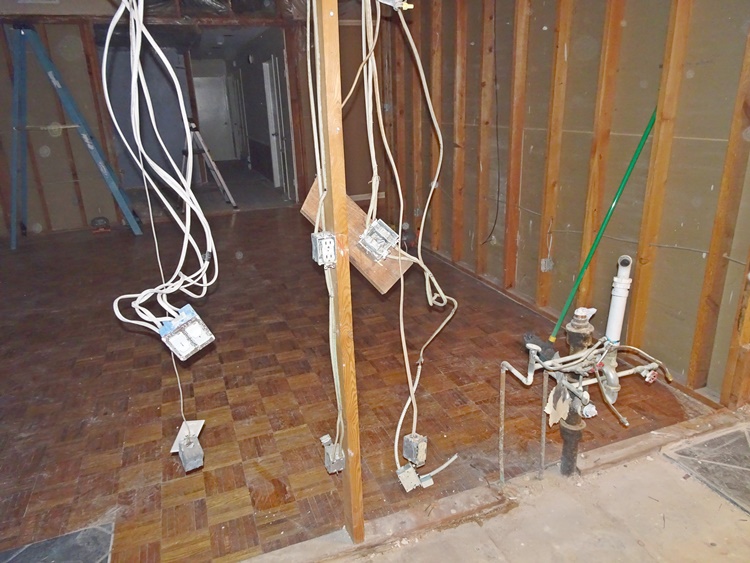 But this picture also shows how the view will be virtually unobstructed all the way down the hallway in the background. Less confining; less claustrophobic. And when the new hardwood floors go in, also continuing down the hallway, the visual impact of the space will be magnified considerably. 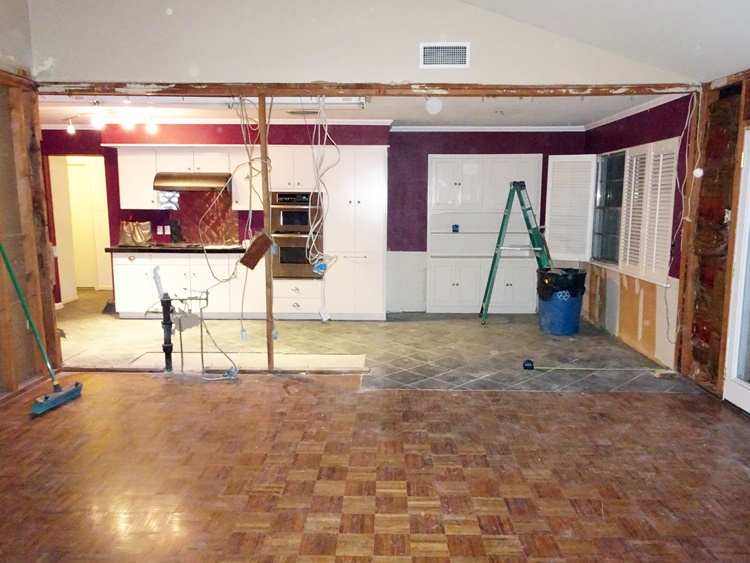 This, again, is the view from the opposite side of the family room. Can you see the measuring tape on the right side of the picture, extending from the wall? That tape marks the open space distance between the wall and the island. There will be an equal corresponding opening on the other end of the island between it and the family room wall on the left (the island will begin just to the right of the existing drain stack – about where the first supply line is). And, remember, the entire back wall of the kitchen eventually will change. Knowing Debra as I do, I suspect that the change will occur pretty quickly. She’s not going to abide half of a new kitchen for long. (That yucky paint, for sure, will go away very quickly, no matter how long the rest of the kitchen project takes.) 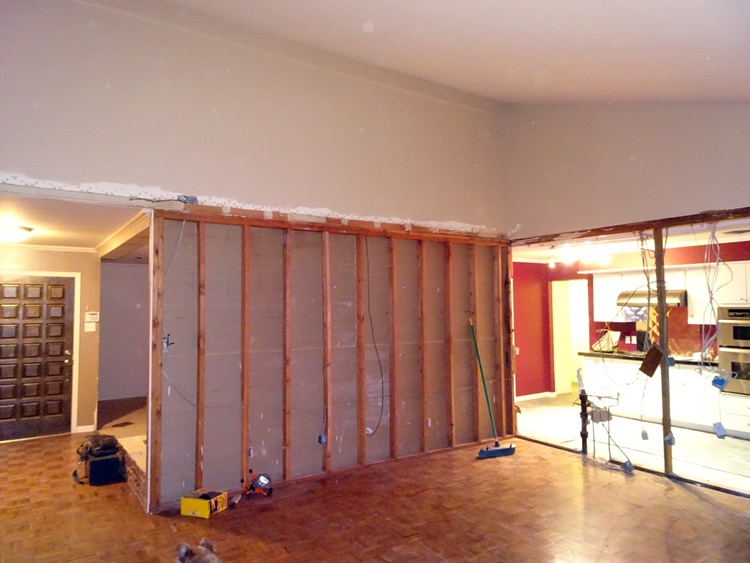 Above, standing at the fireplace and looking toward the front of the house, you can see how removing the wall facilitates the flow. Below is another shot showing a little more of the dining room/library: 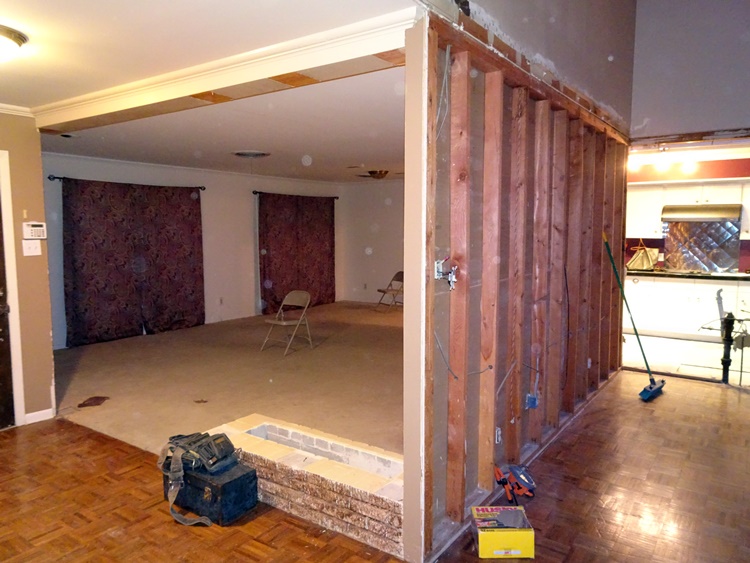 If you’ll recall, there were three columns on top of that brick thing, which itself will be removed post-haste (pardon the pun – post, column – get it? Don’t know why I can’t resist post puns -remember this and this?)

Back to the other side of the family room. As you can see, below, that wall has been shortened a bit, as well. 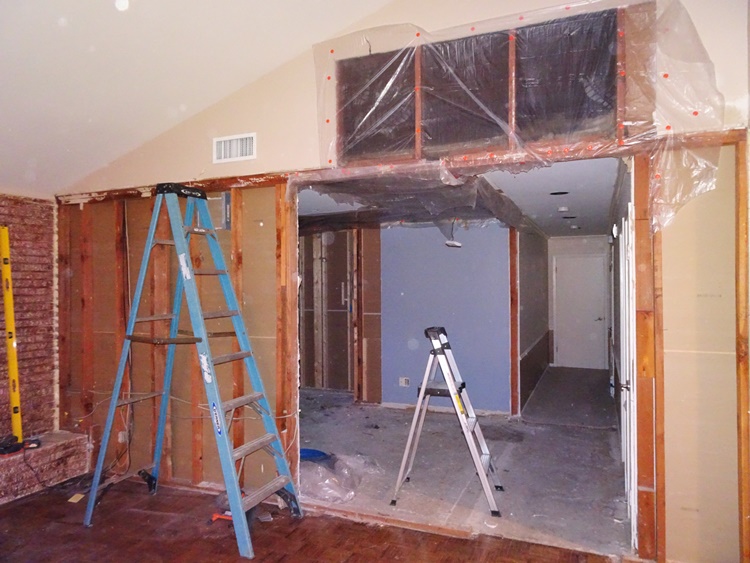 The area to the left will be converted into a new laundry room and powder bath. The hallway in the area adjacent to the laundry room will be 5 feet, instead of 3, and in front of the door to the powder it will be 7 feet. This configuration will, again, increase the open feel of the entire space and add a little architectural interest to the area. The remaining hallway, by virtue of being much shorter, will be much less claustrophobic.

The contractor for this job, by the way, will be the always wonderful Shawn Cowdin of Cowdin Construction. You may remember his work from the kitchen and downstairs master en suite at the SoMoToHo.

I’ll close this post with a shot of Debra contemplating the new laundry room and powder bath area. The powder will be on the right; the laundry room on the left. 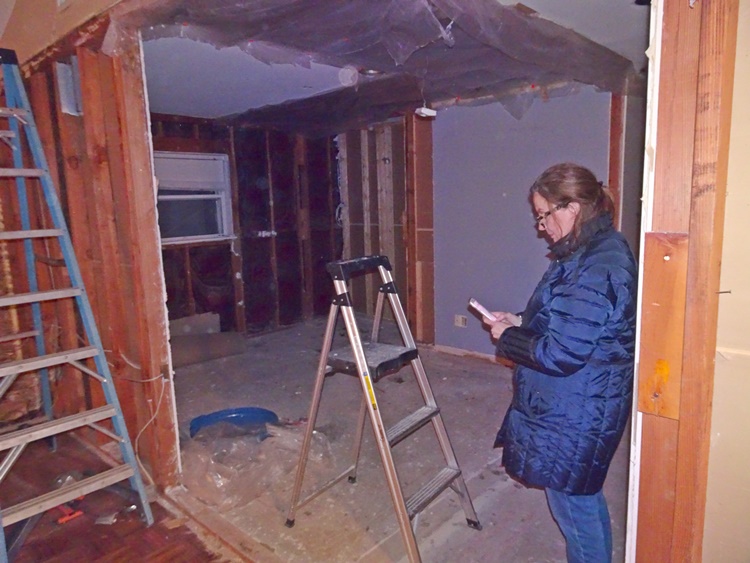 More demolition to come! We hope you’ll be there to watch the walls fall! (And for the framing of the new spaces, of course.)

As always, thanks a million for reading – you make this ever so much more fun!