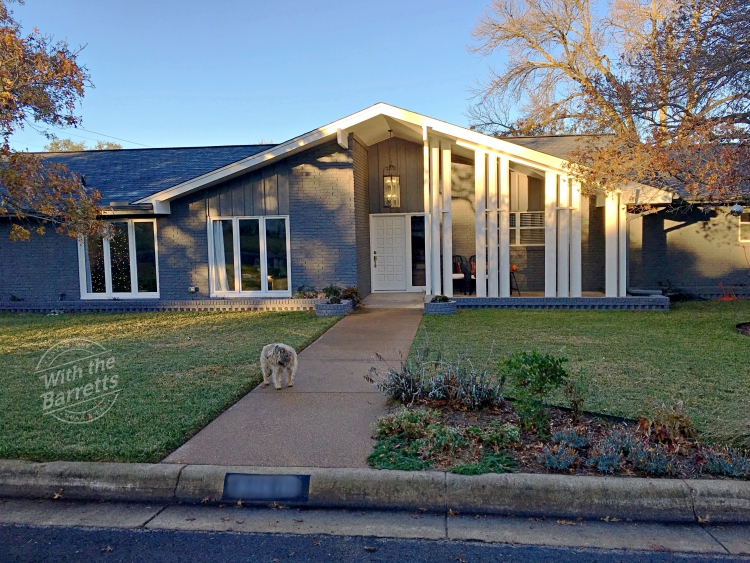 Any home renovation project should involve exterior improvements, as well as snazzing up the interior, and Hildring House is no exception. Just to refresh your recollection, here is a shot of the exterior when we first bought the house: 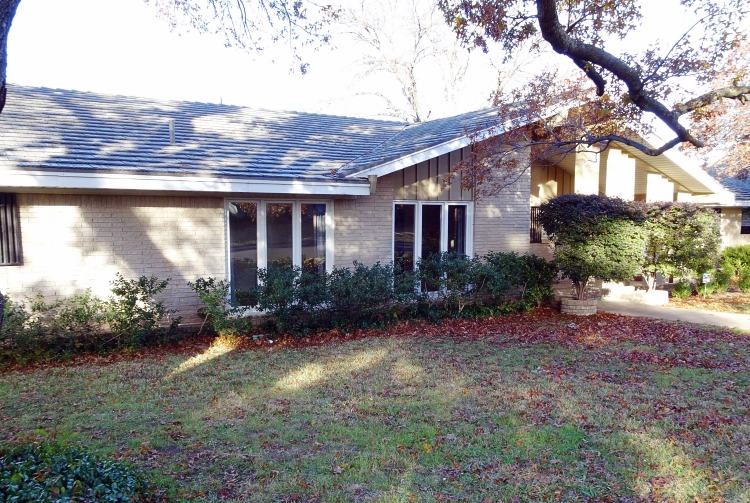 We started with a new roof. And that required more destruction than you ordinarily would expect. You can’t really tell it in the above picture, but the shingles are metal, made to look like shake. I really don’t know how long they had been on the house but clearly it had been through multiple hailstorms. They were really beat up.

The worst part of the roofing situation, however, was that the fascia and underside of the eaves were clad with aluminum siding. I’m probably going to get nasty letters from the siding industry but, please, never do this to your house. I understand all of the arguments about it eliminating the need to paint. But the cost for that is deterioration of the wooden elements of the structure.

No matter how careful the installers are, no matter how much caulk they use, water will get under the metal and sit, unable to dry, rotting out the wood. Until you have this.

As the roof and cladding came off, an old pergola out back had to come down – it was in almost as bad shape as the rotted eaves. Here’s what the back looked like during demo of the metal and bad wood: 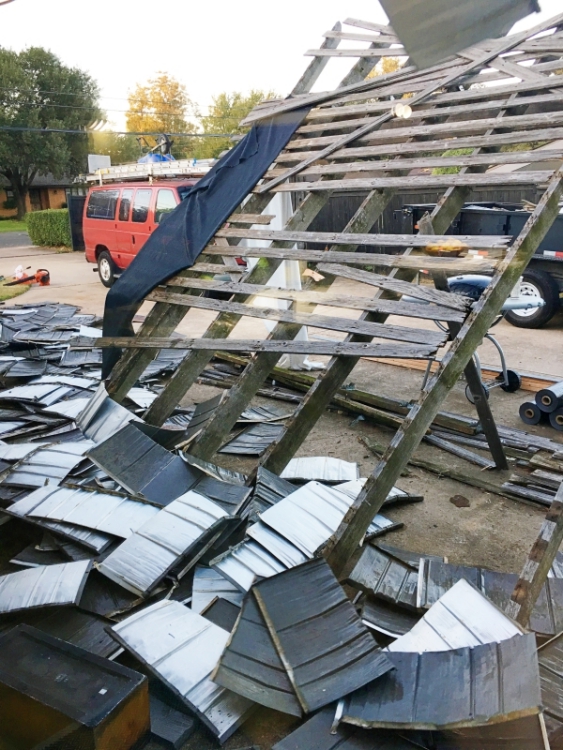 The pergola, precarious to begin with, became all the more perilous as work progressed (like the alliteration?): 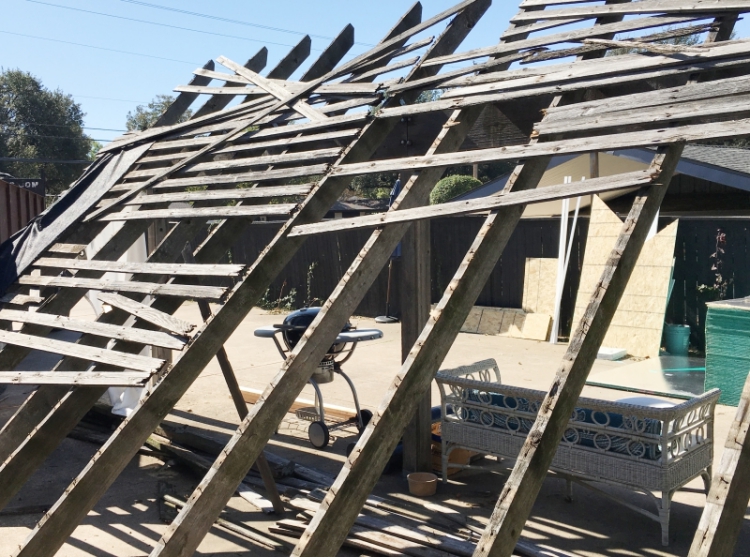 But soon, it was gone. 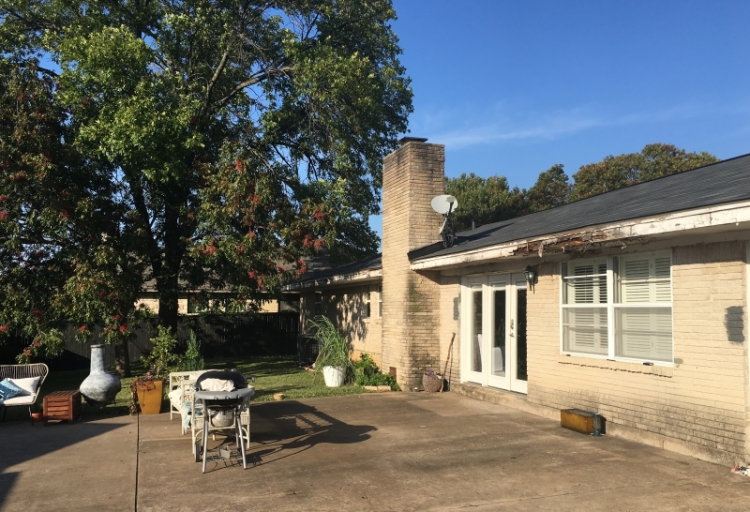 You can see several things going on in this picture – the rotting eave, mold and mildew staining on the brick, particularly on the chimney and running up the wall under the window, and some paint sample patches. Since before we even closed on this house, we planned to paint it.

But first, the new roof went on. 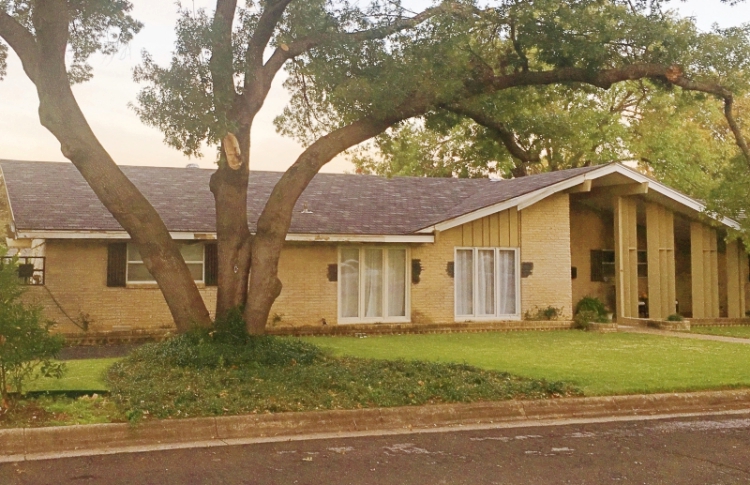 We debated whether to go back with metal, perhaps a standing seam, but opted for impact resistant composition. As you can see in the picture above, as compared to the shake lookalikes, the composition shingles significantly smoothed the line of the structure – more in keeping with the contemporary design. (You can also see more evidence of rotting eaves, as well as more paint sample patches.)

The next step was to repair the rotted eaves. 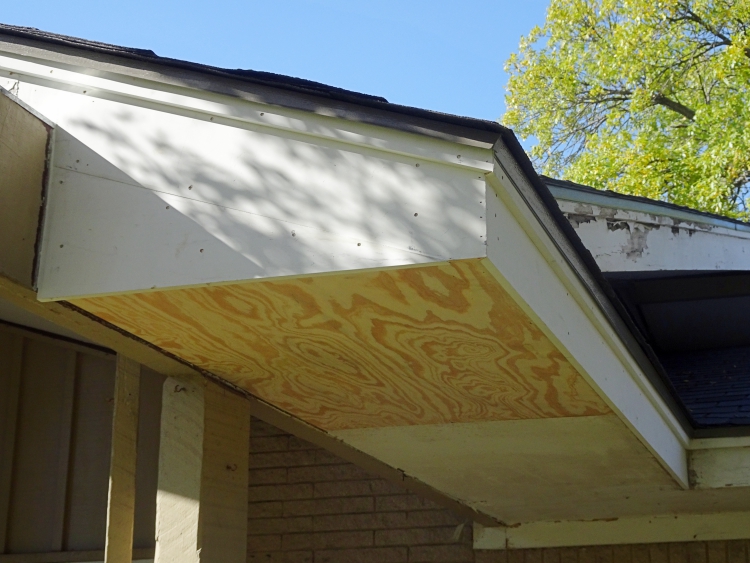 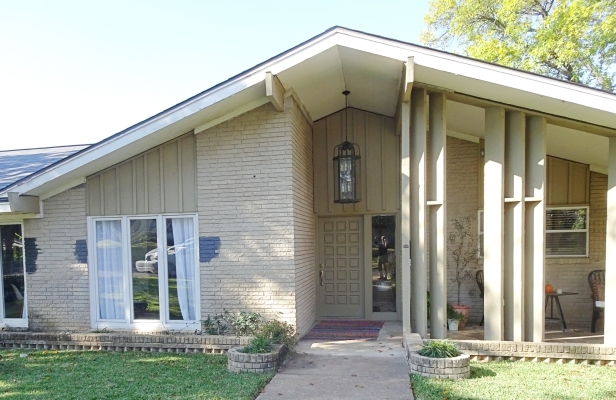 During this process, we discovered that there was no electrical outlet on the front of the house – at least, none that could be reached from the ground. There was one up near the roof line on the front porch, I suppose installed to be used for Christmas lights.

There is an outlet on the inside between the two triple windows. We decided that would be a good spot on the outside for a wet location box. So, we drilled through the wall and installed one. 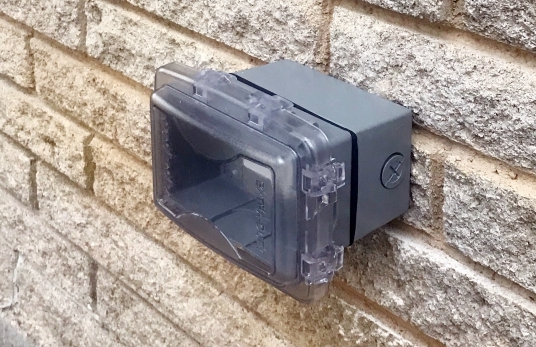 Because, after all, holiday lights don’t just go around the roof, do they? 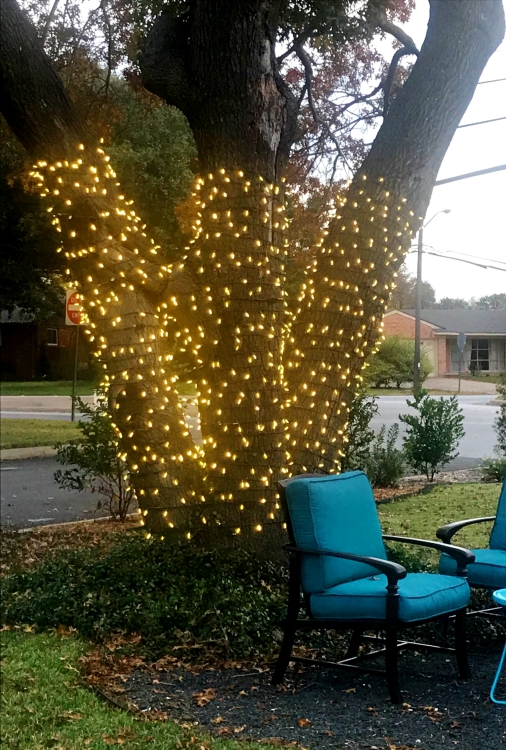 Hildring house has never had gutters. The roof line is such that, during even moderate rains runoff is concentrated into some pretty impressive flows. Ingress and egress can be difficult, particularly out back. So we knew we wanted gutters.

We experimented until we found a paint color that we liked. Then we found a gutter color that was pretty close. Then I took the gutter sample to the paint store and had it custom-matched.

And, happily, we loved the color.

So the painting began.

We’re very pleased with the outcome .

The exterior improvements at Hildring House are by no means complete. Work on the new pergola out back should start immediately. We’ve had new landscaping plans drawn.

As work continues, inside and out, Hildring House is becoming more and more livable – and we are very happy that you’ve joined us for the renovations!

Thanks, so much, for reading!

Here’s hoping that your holidays are peaceful, safe, and joyful!

p.s. – Remember, Debra has a newsletter separate from this blog about the real estate market, staging, decor, and renovation. If you’re not subscribed, please use the form below: