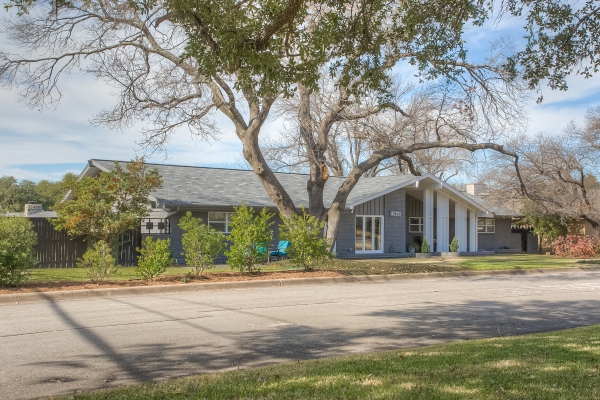 Sorry that it has taken me so long to get around to continuing the before & after shots of the Hildring House transformation. Things have been pretty busy, what with Valentine’s Day and getting ready to move.

That’s right. Hildring House soon will have new owners and Debra and I will be off to a new remodeling adventure. For now, though, let’s keep looking at the changes that took place at Hildring House. Once again, unless otherwise noted, all of the “after” pictures are by the wonderful Trey Freeze.

Let’s start back in the dining/living/kitchen area.

See how isolated the kitchen was? And not just because of the wall. The dramatic change in flooring material segregated the spaces. The pass-through, while a pretty convenient idea, did nothing to help the flow.

Removing the wall, installing the bar/island, getting rid of the fluorescent light box, recessing the kitchen lighting and carrying the same, wonderful oil-rubbed wood flooring throughout all of the area – and painting everything white – made it miles more open, welcoming, and accommodating.

One thing I’ve mentioned before that you might not notice right away is that we had all of the new sheet rocked surfaces in Hildring House finished smooth. As in, no texture. It really made a difference in keeping everything clean and bright.

This is the grandboys’ room. The open door leads to a Jack-n-Jill bath that goes between this room and the office.

While taken from a different angle, you can still see the major differences. The peel and stick door applique is a great touch, I think, as are the gold stars on the wall by the bunk beds. Buddy Bear, who has been around since the older boy was just a baby, guards vintage suitcases filled with toys. We replaced the tired beige carpet with laminate flooring, rather than the wood that is in the rest of the house. More able to stand up to some pretty hard playing, you understand.

The other side of the grandboys’ room has twin Ikea Pax closets and a built-in desk for homework and play. I’m not sure how the new owners will use this space, but it’s pretty adaptable to lots of different purposes.

Overgrown bushes and a falling-down pergola were the main features of the back of the house before.

New landscaping and a spectacular deck and carport, covered with a lovely translucent material that lets in plenty of light, completely transformed the back of the house. Well, and new paint. Paint really does give you a lot of bang for your buck.

Here are a couple more, closer shots of the deck area.

See the big step up into the door? A level deck would solve that problem.

See what I mean? The deck was probably my second favorite change to the house (I still can’t describe to you how much I love the oil-rubbed floors; they’re number 1). It essentially added another large living area.

We added another small deck, which I’ll show you below.

The huge change reflected by this picture, however, is not the cute little deck. It’s the door. We added it for a number of reasons, not the least of which was safety: there was no egress on this end of the house, where three of the bedrooms are. The benefits, though, went far beyond safety, as you’ll see in the next before and after shots.

This is the master bedroom in the before condition. There is an en suite bath to the left, out of frame. That offset window was the major source of outside light. (There was another small window by the door to the bathroom. Not acceptable.

In order to preserve – or, rather, create – symmetry, we had to move the window on the right and add the window on the left. And we added the door, one panel of which you can see on the far left. Yes, we carried the fabulous wood into this room, as well. A new ceiling fan, because I really wanted one (have I mentioned how Debra hates ceiling fans? I guess its a design thing), new lighting and paint, and it really doesn’t appear to be the same room, does it? Well, I guess it really isn’t the same room, even though the basic structure is the same.

And that’s the point, isn’t it?

We’re not finished with showing off the Hildring House transformation. For instance, you haven’t seen Debra’s Domain. (By the way, if you follow that link to the post where I first mentioned Debra’s Domain, you will be able to see some shots of the Hildring House demolition.) And you haven’t seen Debra’s pride and joy, the world’s smallest-but-most-beautiful-bath.

Debra promises that she’ll do those in the near future. And you’re in for a real treat with those posts, because the “after” shots will be by our magically talented friend, Amber Shumake.

So … thank you so much for coming on this journey with us. It has been lovely to have you along! And STAY TUNED!

New trim with a custom profile designed by @debrab

Ceiling #wallpaper for the hallway - close-up & a

Some might think that the new #color in the hallwa

Sometimes, I walk in the door and am stricken with