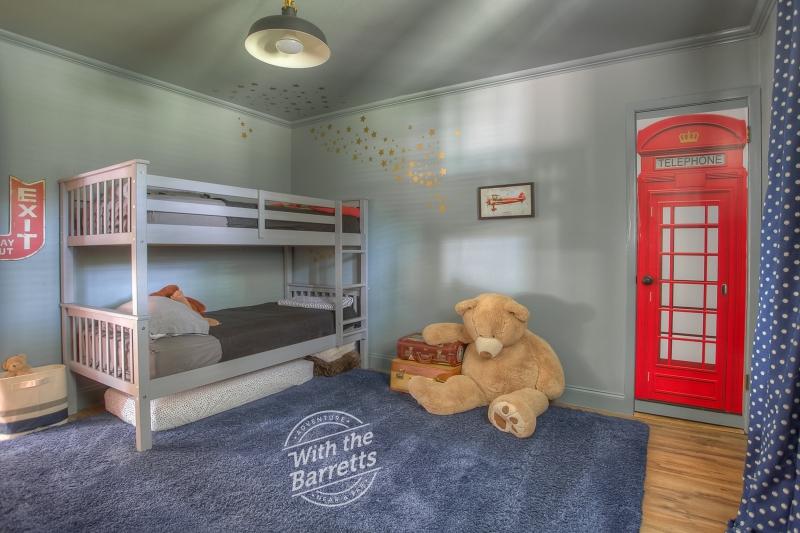 We are very lucky to have our grandchildren nearby. They spend a good bit of time at our house, so it was important to us to create a space just for them – the boys’ room. Kids’ rooms run the gamut from “leftover” to “designed-within-an-inch-of-their-lives-cutesy” spaces…

I was shooting for something in the middle. A space for sleeping, playing, and storing toys. We have diligently attempted to limit the amount of store-bought toys in the house. Our preference is for them to create their own toys using imagination: boxes, string, whatever they can find. (This is Dan, chiming in. They usually do very well.) And I confess, we often break down (we’re grandparents, after all). Like when we invested in the giant bounce house water slide. So there is that 😉

It’s not pretty, but it’s oh-so-fun for little boys. (You may remember it from this post.)

Anyway, back to the room-

but the closet felt awkward. It left a little open space at the end where the previous owners had put a desk. That was a good use of the space, but I was hoping for something more. Also, the closet was not great- just a regular 1960 closet with a hanging rod and those awful bifold doors. (If you love them, I’m happy to give you several pairs. In my experience, they’ve never functioned very well). 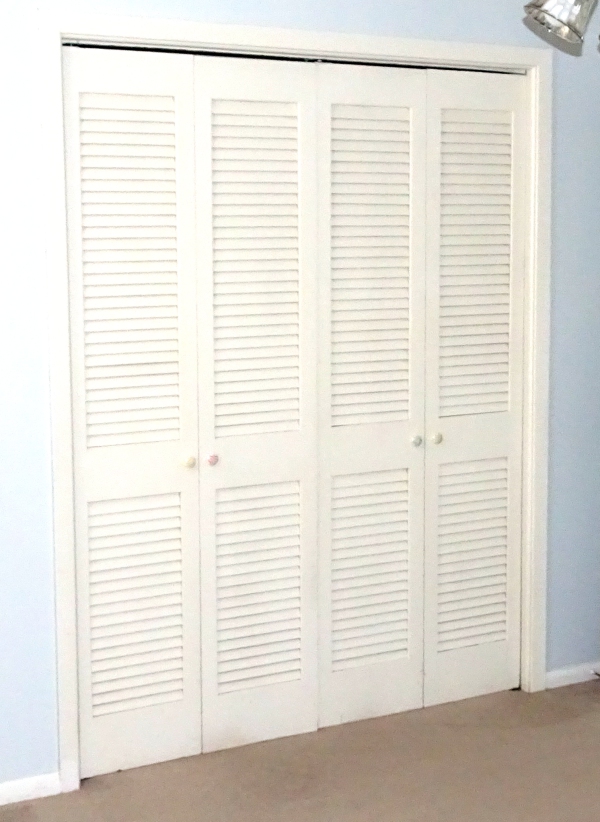 The floors were covered with carpet of unknown vintage – and I know how hard children can be on carpet, so I also wanted to change that. The walls were blue, which made the older grandboy happy. It’s his favorite color – but it wasn’t the shade of blue I would’ve chosen.

So we ripped everything out (you can see some of that demo here) and stuck all their stuff from the last house in there temporarily. The younger one was still in a crib, so furniture changes wouldn’t happen until he was ready to make a move to “big boy bed.”

Here’s a shot taken while we were trying to figure out where to put everything:

We chose to put an inexpensive laminate floor in this room – it’s easy to clean and looks good. Perhaps we will redo at some point with the same wood used throughout the rest of the house, but we had to put the brakes on our (my?!) spending (hear, hear!) … so this was also a budget friendly solution.

Putting it all together

We chose a darkish blue gray for the walls (Benjamin Moore Cloudy Sky), and continued it on the trim and ceiling. We chose a black for the closet wall so that the Ikea closets – and the weird bump out formed by the oh-so-tiny entry closet in the hallway just outside the door to the boys’ room – would blend with it.

Have I told you how much I LOVE these Ikea closets? Of course I didn’t put

them together, so Dan may have a different opinion. (Now that some time has passed, I’m fond of them, too.) But they have just the right amount of storage for the boys-one closet each- drawers and hanging space. I would love to use these in the master bedroom where we also have the standard 1960 closet with not-so-lovely bi-fold doors.

I struggled with the design a bit because I wanted something not too childish or over-the-top thematic. At the last house, we stored toys in the vintage suitcases and had the travel prints, both of which I really liked. So I decided to keep the travel things. Travel is one of my favorite things in life and it’s something we hope to share with the boys.

I found the peel and stick door cover on Etsy and had to have it – (do kids know what phone booths are?!) I love the red contrast with the blues in the room.

The rug was a gift from a design client when we redecorated her family room. And I love how cushy and soft it is – great for playing on the floor and makes a perfect base for forts. (Pull out the two chairs and cover them with a blanket and – voila! – you have a fort!)

We decided to go with bunk beds in the boys’ room so that we could leave more floor space for play. And don’t all little boys love bunk beds? (The crib mattress is under the bottom bed so that we can pull it out as a soft landing spot for the younger one in case he falls out of the “big boy bed.” So far, no mishaps!) We found them at Wayfair and they are nice and sturdy with a reasonable amount of space between top and bottom bunks (be sure to pay attention to that measurement when buying – the bottom can get really claustrophobic if it’s too tight).

My only caveat about these beds – all of the fasteners require an Allen-wrench and they are tight. Many of them are screws, not bolts, and require enough torque to bite the wood. The manufacturer sends one small tool and it would be nearly impossible to assemble the beds with only that wrench. If I hadn’t had Allen-wrench bits for a nut driver and ratchet, I probably would have just used the bunk beds for kindling. I certainly couldn’t have put them together.

Here is another view of the almost-finished product.

Did you clock the “almost-finished” back there? A couple of things that I know are going to change pretty quickly (I’ve told you before – things don’t get “finished” around Debra) are the light above the built-in desk and the windows. 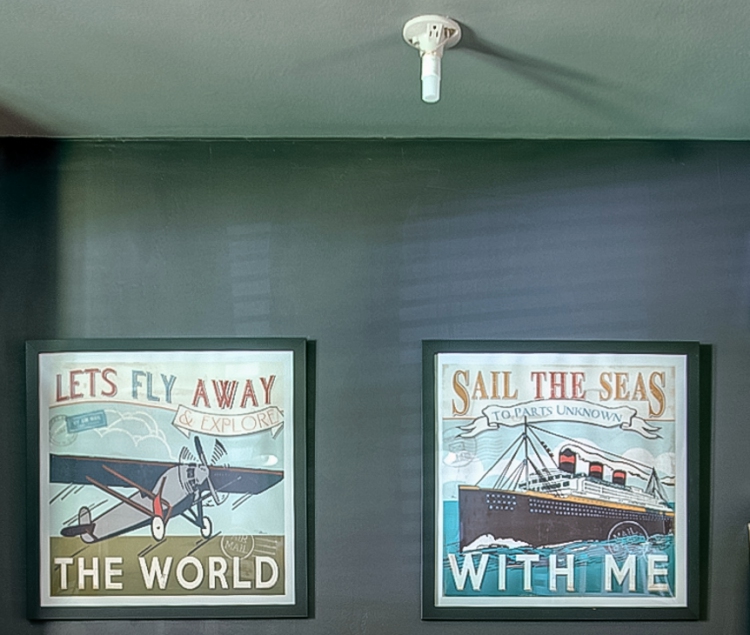 was the light in the closet that Dan tore out. We had it re-wired to operate with the main switch but – obviously – we need a new fixture. I’m not sure what will go there but it will be cooler than this, for sure.

The plan all along has been to expand the windows in this room, the office, and the guest room (Debra’s domain) into floor to ceiling matches for the ones in the library/living room. (You can see those here, if you don’t remember.) For the time being, though, the boys needed curtains – the room just doesn’t looked dressed without them. So we got the polka-dot ones in the picture above. Cute, a little playful, and I like polka-dots. A lot.