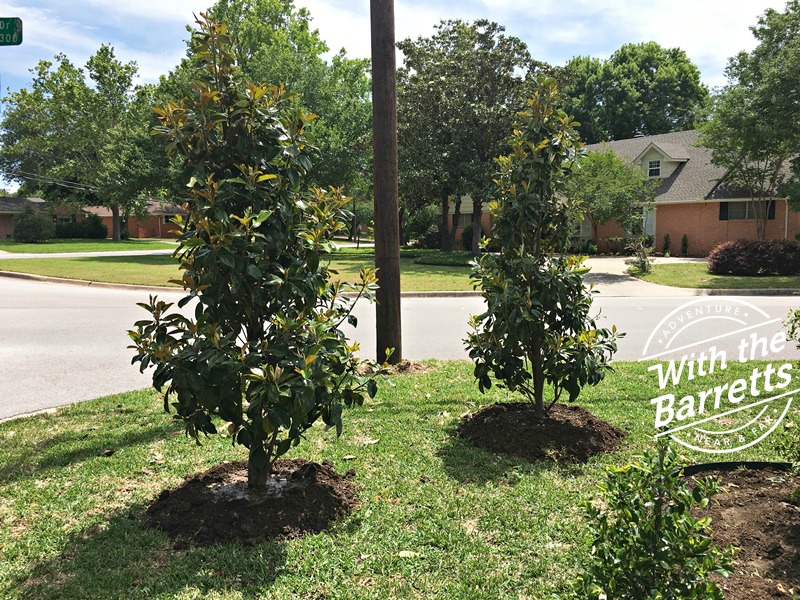 Let’s go take a look at the Hildring House landscape, shall we? Debra is working (I get to help a bit with the technical parts) on what should be a great post that goes right to the heart of this whole endeavor – why we do what we do. I’m pretty excited about it for a number of reasons, not the least of which is I think it’ll illustrate just how talented she is and how lucky I am. But, in the meantime, spring is here and we’ve been busy digging in the dirt!

The Once and Future Trees

I was out working in the screening bed one day and a neighbor stopped by to tell me that there had been a big magnolia in that very spot. Apparently the drought a couple of years ago killed it – a story about which I have several questions but won’t investigate further. Since before we bought this place, Debra said that she wanted a magnolia on the corner. So we put in two Claudia Wannamakers between the screening bed and the corner. (And, yes, I know that they are pretty close to one another, but Debra wants them to grow into and intertwine with each other. So that’s what’s going to happen.)

We’ve planned abelias for the long-side fence but decided to break them up with a bald cypress. Here it is:

Yeah, it’s kind of little. But we know from experience that with some love and a lot of water, it’ll grow fast!

The Progression of the Beds

We put a little color bed out front by the sidewalk. Right now, it’s at the stage where everything is pretty much the same size, but that will change quickly.

The Russian Sage at the back on the left will soon be 5′ tall and thick. It’ll die back to the ground in the winter but return again in the spring. The Texas Mountain Laurel will grow into a small tree with purple flower clusters that smell like grape kool-aide. The peony next to the guara is a slow-growing beauty (see below). The guara, itself, will feather the end of the bed nicely. The front of the bed will change with color from time to time. Right now it has some sedum and some dianthus and something else that I’ve forgotten the name of.

The peony has already produced a bloom – here is what it looked like, backed up by some pale tulips:

See why I called it a beauty?

We finally got enough (I think) jasmine in the ground cover bed to justify putting in mulch. I just hope that it is vigorous enough to choke out the nut grass.

We anchored the screening bed with 3 wax myrtles and filled the gaps with 5 cherry laurels. I know that a lot of folks don’t like waxes – short lived, prone to bugs, etc.  But we’ve had pretty good luck with them in the past, particularly from the standpoint of establishing a screen quickly. They grow fast and will shoulder a lot of the burden of blocking the bad juju from the intersection while the slower-growing but hardier laurels mature.

The shade bed – so called because it is under a red oak and will get only partial sun and then only in the morning – will be populated with oak leaf hydrangeas – the first denizens of which you can see here. We debated about putting lots of different shade-loving plants in here but opted to do it all in oak leafs. I love them. When we re-do the windows on the front of the house, this bed will be right outside the floor-to-ceiling office window.

In any event – that’s the progress of the Hildring House landscape to date. I’ll close with a panorama shot that can give a little idea of how it all fits together.

Keep coming back – and let us know what you think!

These #peonies were bright pink before they opened

Zoom in on the 1st pic & you can see #effiethewond

Come take a walk around the #kimbellartmuseum with

Sights from a morning walk. #carebears or #treepeo